BellaCrochet
Crochet great Jean Leinhauser has passed away from a heart attack. Anyone wishing to send a card to Rita can mail it to:
Creative Partners, LLC
3536 Avenida Sierra
Escondido, CA 92029

:(  a crochet great has passed away
Posted by Robin Fonner Andersen at 6:43 PM No comments: 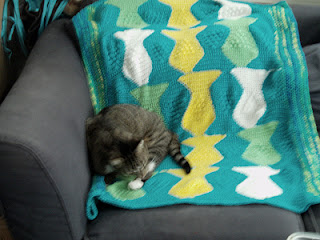 Also, if you have the current copy of "Crochet Today" (July/August 2011), there have a familiar (to me) looking afghan on page 74....here's my interpretation of it. I made this for my great nephew Aidian

this is _not_ my pattern, I seen the motif on Ravelry a few years ago (makes sense, because this photo is from 2009)
My beloved prefers my version better because he lives with me;) check it out for your self
http://www.crochettoday.com/crochet-patterns/school-fish-blanket

_enjoy_
Posted by Robin Fonner Andersen at 10:42 AM No comments:

Good grief, It's my blogoversary, who knew? 6 years.....6 years. and I started with a post
about my younger sister's death and how I made a panda to put in her casket. Wow,  what a bundle of joy I am...
I have still been crocheting, just not as much as before. I have fallen in with Facebook and spend too much time there. I haven't crocheted anything in about a week, spending my time rolling those hanks of yarn into balls so I could use them.
But it's been strange. I visited Maryland Sheep and Wool and only bought - cinnamon roasted pecans. Nope, that's not a color of yarn;) Part of it was I felt like I already have too much yarn. And nothing was that interesting to me. It seems as if MDS&W discovered felting this year and there was a lot of that sort of equipment there.
There's 2 other pieces to that answer too. I have a ton of yarn, I mean, seriously a ton of yarn. I paid my nephew to organize it for me - I know, crazy. But it worked. I told him just to put it in colorways...I would still be sitting there thinking "Yes it's pink but it's fuzzy, plus what weight is this?" over the first skein. So I know I have a large yarn stash.
The other thing is the economy. Some vendors didn't show because it was not cost effective. Some cut back on the stock they brought, having smaller stands. Plus I feel a pinch in my own wallet. It's not a bad one, just one that makes me think "Really, do I _need_ this?" which is not a good way to feel at a place that's just a huge shopping vendor for me.

But here I am 6 years later. Nobody is knocking down my door to make this blog into a movie or even a tv show;) But I have had a lot of fun and hope you have, too.

_enjoy_
Posted by Robin Fonner Andersen at 9:48 AM No comments: