the Art of Crochet

I love the title "The Art of Crochet" but I didn't think of it, Teresa did. And much more importantly that that, Teresa has produced a large amount of tutorials that are available at YouTube so you can see how certain stitches are done.
I need to see how a stitch works to really "get" how it's supposed to be done. I can follow the directions from a book, but without a visual on how the stitch is supposed to look, I have a difficult time figuring it out.
I can't go to everybody's house and share my love of crochet. I wish I could, I think that would be great. And I haven't taught anyone to crochet in a very long time. But if I were to teach anyone, I would hope I would be as clear and concise as Teresa. Check out her tutorials on YouTube, they are great. Even an old dog like me can learn something new from the tutorials.
Here's the address: http://www.youtube.com/show/artofcrochet

Enjoy
Posted by Robin Fonner Andersen at 12:22 PM No comments:

Oh deBBie, you need to contact me with your info so I can ship the book to you.......
you won
Posted by Robin Fonner Andersen at 5:25 PM No comments:

no, I didn't fall off the edge of the earth

I've just been working at my wreck a wrist job;) We've had a few changes in personnel at work and things have been a little on the screwy side. Nothing that unusual, but it adds up. And when my right wrist hurts that bad (arthritis? carpal tunnel? old age;)) I don't want to crochet.
I was working on the companion panel to the standing lion curtain. I got up to about row 30 and realized there was an error a few rows back. So I pulled it apart. Than, of course, there was another mistake and I ended up taking it back to row 14.  As you can guess, I wasn't too thrilled about that. I worked back up to row 19 and stopped there. Now I got to pick up the work and finish it.
Does anyone else get like that, too? I'll be excited to start a new project, get in the middle of it and think "oh, man, I want to be working on something else". It doesn't matter _what_ else, but it's usually a project I've been thinking about doing in that vague way I have - the "wouldn't it be cool if I took this yarn and that yarn and used this stitch and made whatever". I hadn't thought it out all the way, not even quite sure what I'm aiming for but of course, that's going to be really interesting - once I finish whatever it is I am working on.
A long time ago, BC (before children), I'd have a couple projects going on and would alternate between 2 or 3 of them.  I just alternate between 2 projects now. Currently, the lion panel and the ever easy, ever popular preemie hats. I can crochet them when I watch television and not make a mess of it...apparently I can't do the same with the lion curtain.
I shouldn't  blame my kids - they moved out about 4 years ago, so it's not like I'm doing any intensive mothering.  But it's easier to blame them than to blame myself for being a bit of a yarnoholic (okay, more than a bit) and disorganized. I am slowly trying to work on this, but it would be easier to do this with the antics of my cats. They think all the yarn is for them. If it's in a bag, it must be pulled out of the bag. It must be rolled across the floor. Disorganization and inquisitive cats don't make for a good combination. 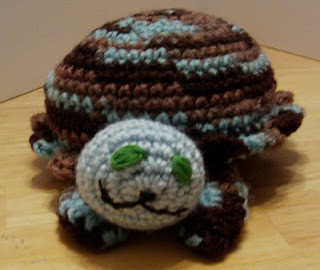 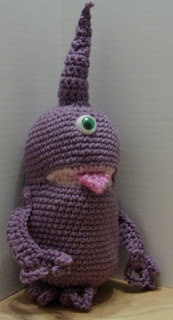 But I have made a few toys along the way. I'm putting these two for sale in my Etsy shop to see how it goes. I doubt I will be one of those Etsy stories where I can quit my day job and crochet all the time, but that would be cool just to sell a few. I have sold a few turtles, they seem to be popular.
so until next time, _enjoy_
Posted by Robin Fonner Andersen at 9:36 PM No comments: